Six years ago, Stephanie Morales became the first woman elected as Portsmouth Commonwealth’s Attorney. She ran on a progressive platform that promised to combat mass incarceration and reform the bail system that punished poor people for an inability to pay.

Since entering office, Morales has set new standards for addressing inequality in our criminal legal system and police accountability. While only a handful of prosecutors have ever successfully prosecuted and won a conviction in cases where a white police officer kills a Black person, Stephanie Morales is the only prosecutor in the country to have successfully indicted more than 1 officer involved in an on-duty shooting. 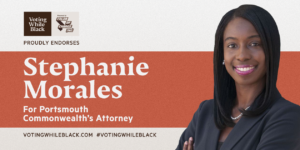 As Portsmouth Commonwealth’s Attorney, Stephanie Morales has been a trailblazer with an unwavering commitment to criminal justice reform. During her tenure, Morales also:

This year, vote for a local champion committed to making the community safer and the commonwealth’s justice system more fair and equitable. Re-elect Stephanie Morales as Portsmouth Commonwealth’s Attorney on November 2, 2021.

You must be a registered voter to participate in this election. Register to vote today by October 11 or check your registration status here. Election Day polling places will open on November 2 from 6AM to 7PM.

*Note for residents with felony convictions: Governor Northam has updated his eligibility criteria for restoration of civil rights. Effective March 16, 2021, individuals are eligible to have their voting rights restored after being released from incarceration. Visit the VA Secretary of the Commonwealth for more information.

Ways You Can Participate

Color Of Change PAC is dedicated to increasing Black voter participation to build a powerful Black voting block. We want to make sure that every eligible, Black voter is registered and their vote is accounted for on EVERY election day. Our goal is to ensure that we’re not leaving a single vote behind.

Donate to help keep our program sustainable. We’re funded by grassroots supportors like you. Recurring donations help ensure we can continute our mission.