New York, NY — Today, Color Of Change PAC, the political action committee of the nation’s largest online racial justice group, announced it is endorsing Larry Krasner in Philadelphia, PA for District Attorney, and Stephanie Morales in Portsmouth, Virginia for Commonwealth’s Attorney. Their races are scheduled for May 18, 2021 and June 8, 2021, respectively.

“Larry Krasner and Stephanie Morales have shown us that protecting public safety and upholding the law can and should go hand-in-hand with the fight for racial equity,” said Arisha Hatch, Executive Director of the Color Of Change PAC. “Both candidates have exhibited strong and community-oriented leadership, and it is imperative that they are allowed to move forward with the progressive criminal reform work they’ve started in their cities. Though their opponents are determined to dismantle the progress made at the expense of our communities, we refuse to let that happen. Change is possible–we’ve seen it happen, and we will work tirelessly to ensure that it continues.”

For the last several years, Color Of Change PAC has prioritized supporting district attorney candidates who support criminal justice demands that will prioritize the well-being of Black communities while bringing about essential change to the criminal justice system. With these endorsements, the PAC is continuing its tradition of endorsing candidates who demonstrate an unfailing commitment to reform.

In 2017, Larry Krasner became one of the first DA candidates to be supported by the Color Of Change PAC. He earned such initial support thanks to his incredible track-record of specializing in police brutality cases, having represented activists harmed by police officers. He also stood as a long-time advocate for demanding better treatment of Black communities by law enforcement. Color Of Change PAC hosted a number of get-out-the-vote events which ultimately led to Krasner’s initial election as District Attorney. Since then, Larry Krasner has implemented a number of critical reforms including ending cash bail for 25-low level charges leading to more than a 20 percent increase in people being released without posting bail, reducing drug convictions and adult prosecutions of youths and protecting immigrants from deportation. He has also significantly reduced the number of Philadelphians living under some kind of court supervision by more than a third. Furthermore, Krasner has been a leader in working to hold police officers accountable for targeting and harming innocent civilians. His office has brought charges against Philadelphia officers who were seen physically assaulting protestors last summer, and he has brought murder charges against officers who killed a civilian while on duty.

Stephanie Morales is a courageous Commonwealth’s Attorney who challenged retaliation efforts from police officers towards Black leaders and activists following last summer’s protests against police brutality. Morales, in fact, is one of a handful of prosecutors who successfully convicted a police officer for the death of a Black man and sits in an even rarer class of having been able to indict twice. Since first taking office six years ago as the city’s first woman prosecutor, she has declared and held steadfast to her pledge to decline prosecuting cases involving marijuana possession, and reduced the number of people sent to prison under her jurisdiction. Morales has also developed a number of reform and training programs including the Ctrl + Alt + Del Program which helps restore rights to people with felonies and reduce recidivism, and a monthly training program with the Portsmouth Police Department where attorneys train the department every month on topics such as guidelines for constitutional search and seizure practices. Just this year, Morales called on the Virginia General Assembly to end mandatory sentencing minimums, cash bail and the death penalty.

Color Of Change PAC plans to support these candidates by building enthusiasm and mobilizing voters who are often left out. The organization leads an education campaign that informs voters about the link between criminal justice reform and voting. One of the first-ever political organizing groups to figure out how to reach and engage its members online, Color Of Change PAC has ramped up its digital tactics, including hosting virtual events like Black Joy Socials, text and phone banking, virtual squad meetings and PPE drop offs in response to the limitations COVID-19 has put on in-person advocacy and voter engagement. The organization also plans to send direct mail, launch email and SMS broadcasts, and deploy digital ads to reach voters.

Color Of Change PAC draws the link between voter turnout in district attorney races and real change in Black communities. The PAC seeks to endorse candidates that support the criminal justice demands which will bring about essential reforms; these include ending money bail, reducing collateral consequences for immigrant defendants, protecting kids within the juvenile justice system, holding police accountable, and being more transparent with the public.

Paid Pol. Adv. paid for by ColorOfChange PAC,
1714 Franklin St., Oakland, CA 94612, independently of and not authorized by any federal, state, or local candidate or candidate’s committee. 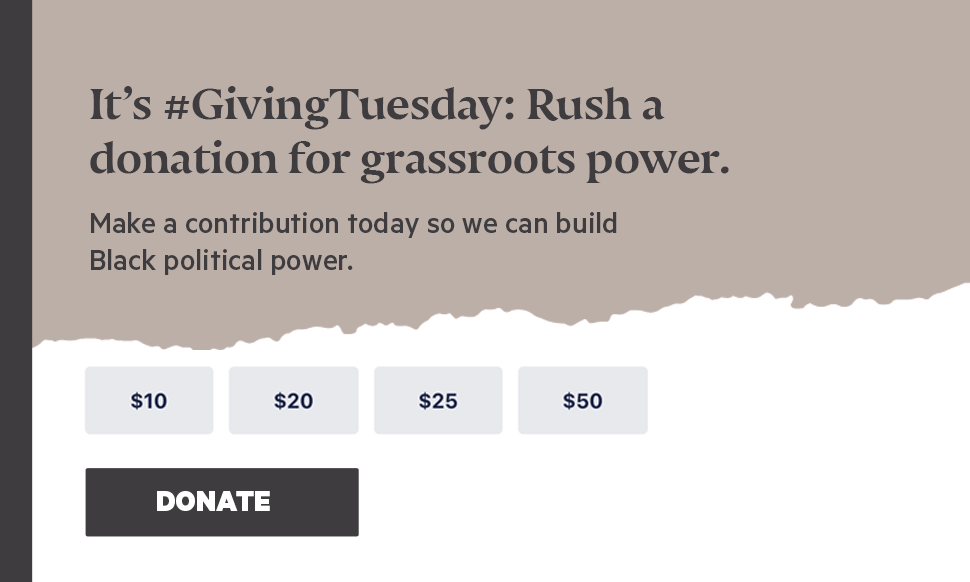